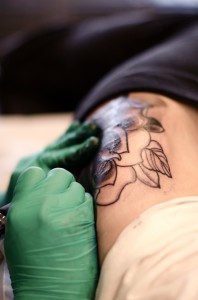 Tattooing nowadays becomes regularity in all kinds of social levels. From high-rank CEO‘s to lowlife criminals, tattoo evolved in to an art form, cherished by many all around the globe. It all began over 5000 years ago, innocently enough with probably a small bruise. The first tattoos probably were created by accident. Someone had a small wound, and rubbed it with a hand that was dirty with soot and ashes from the fire. Once the wound had healed, they saw that a mark stayed permanently.

Tattooing has been a Eurasian practice since Neolithic times. “Ötzi the Iceman”, dated c. 3300 BC had 57 different tattoos. All throughout the world different meanings were attached to tattoos over the ages. In ancient China, tattoos had been associated with criminals and bandits since at least the Zhou Dynasty. Tattooing Chinese characters such as “Prisoner” on convicted criminals’ or slaves’ faces was practiced until the last dynasty.  Some criminals were even sentenced to tattoo their faces. Tattoos have been used as cultural symbols among lots of tribes in India, as well as the caste-based population of India. In Philippines, sometimes tattooing was considered a sign of rank and power in some tribal communities. However, for example, during classic Greek period, tattoos were only common among slaves. In Japan, tattooing was only practiced by the “ukiyo-e” (The floating world culture), this group involves generally fireman, prostitutes and other lowlifes, who wore tattoos to communicate their status in the society. In the land of the rising sun, criminals were „inked“ to carry a visible mark of punishment, this form of „punishment“ actually replaced cutting noses and ears. A criminal would receive a single ring on their arm for each crime committed. This was an obstacle for those to integrate into society, which led almost all of them into criminal activities which ultimately formed the roots for the modern Japanese mafia, the Yakuza.

The invention of an electric tattoo machine in the 1890s made a yet slight but growing difference in understanding and approach towards tattooing. It was in 1960s when the place of tattooing in popular culture radically shifted. Earlier used iconography such as badge-like images evolved into customized full-body tattoo, known as sleeves, which are categorized under the relatively new and popular Avant-garde genre. Tattooers over the years transformed into „Tattoo Artists“, which became recognisable profession even in the academic art world. Even though tattoos were always connected with male sex, in 2012, tattooed women outnumbered men for the first time in American history – according to a Harris poll, 23% of women in America had tattoos in that year, compared to 19% of men. Even thought almost everywhere around the globe tattoo started it‘s life as a sign of criminality, it has evolved in to an art form suitable for all social figures.